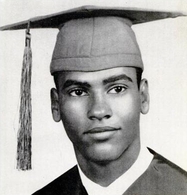 Born a leader on February 17, 1942 in Monroe, Louisiana, Dr. Huey Percy Newton was destined to change the world from a young age. Shortly into his life, Huey and his family moved to Oakland, California in search of financial and economic opportunities. Newton was deeply affected by the high crime in inner-city Oakland. As a teenager, he found himself in trouble with the law more than a few times. He graduated high school in 1959, despite hardly being literate at all as a result of poor black education in Oakland. However, he still went on to attend Merritt College, also in Oakland, where he met soon-to-be lifelong friend Bobby Seale. Newton and Seale found themselves to have common morals and values as well as share an anger with the American government and society. They both viewed the federal government as “an imperialistic domination that oppressed blacks through the police, the military, confinement to ghettos, and poverty,” due in large part to police harassment and brutality toward the black community in Oakland.

Newton and Seale founded the Black Panther Party for Self-Defense in 1966 in retaliation to their common frustrations in an effort to bring about change for the black community across America. The newly founded party scheduled a protest in October 1967 that turned into riot. Surrounded by violent gunfight, Newton shot and killed Officer John Frey. His trial for murder sparked a new campaign to guarantee the Eighth Amendment, the right to a fair jury in front of one’s peers, to Huey and the black community. This campaign became known as the “Free Huey” movement and rapidly gained national attention, putting the BPP on the national as well as global map. This campaign aided in Newton being acquitted in August 1970 of all murder charges. Upon his release from prison, Newton, Seale and the rest of the booming Black Panthers sought to unify the BPP through political education programs. Newton experienced various struggles throughout the rest of his life including hard drug addiction, which eventually led to his death. Upon leaving an Westside Oakland drug establishment in 1989, Dr. Huey Percy Newton was fatally shot twice in the face by gang member Tyrone Robinson.